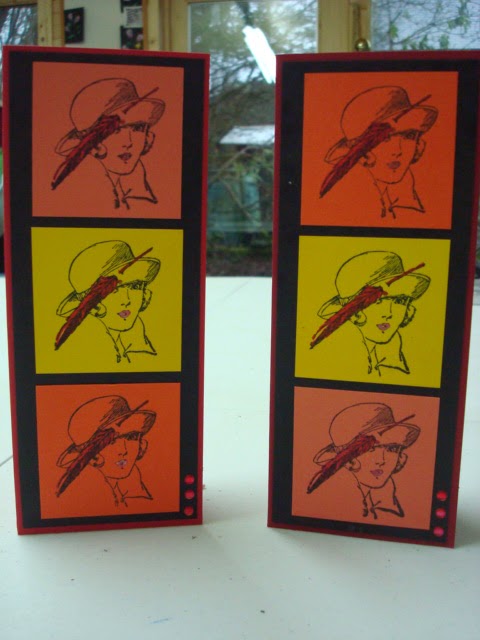 These are a couple of cards I made today it is just a simple plain stamped image the only colour added was to her lips and the feather in her hat.
The images were stamped onto tonal card matted and layered onto black card and mounted onto slim lime red cards and three little red gems added.
The stamp was a free on that came on Craft Stamper magazine I think it was last year some time.
the first image I stamped out I used on an ATC I added a real feather to this one. 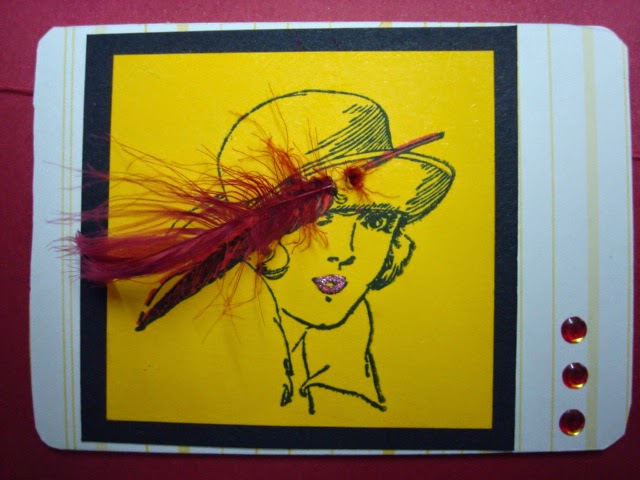 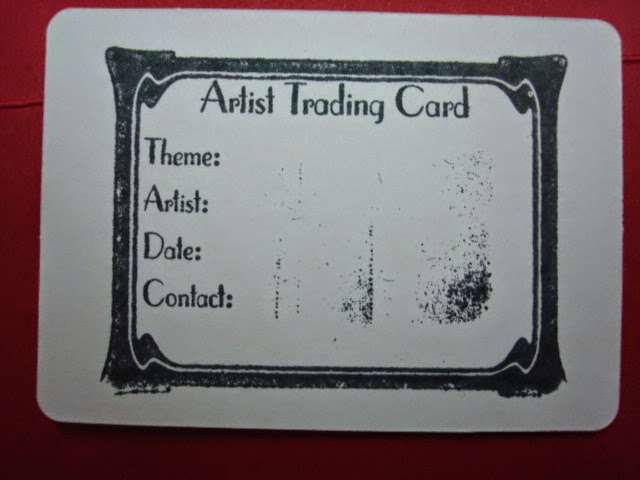 The artists details are added to the reverse and the cards are swapped, they are a great way of trying out different mediums and techniques
Here is a bit of history about ATC's
Collectable trading cards have been around for over 120 years, being first produced in the 1880s by tobacco manufacturers, and later by confectionery and gum makers. Many early cards featured sports stars, but since then all manner of subjects have been covered. Collecting and trading these cards is a hobby which has been enjoyed by millions of people throughout the world.
In 1990, after admiring a collection of hockey trading cards, Swiss artist Vanci Stirnemann was inspired to produce a catalogue of his work in this format, but found that the printing costs were prohibitive. He shelved the idea, and it was not until 1996 that he decided to make the cards by hand. Thus the first artist trading cards were created.

The first exhibition of 1,200 handmade cards took place in April 1997 at a bookstore and gallery in Zurich, Switzerland. Visitors were encouraged to make their own cards to trade with Stirnemann and others at the close of the exhibition. Regular trading sessions have been taking place there ever since.
Canadian artist Don Mabie (aka Chuck Stake), of Calgary, Alberta, is credited with introducing ATCs to North America after attending one of the first trading sessions in Zurich. From there the idea has spread all around the world through the medium of the internet.
Unlike other trading cards, ATCs are never bought or sold, but with their rise in popularity there has been a growing interest in similar cards made for sale. These are usually known as artist cards editions and originals, or ACEOs.


I have a good collection of ATC's that I have swapped with others over the years, its been some time since I did any or joined any swaps, I might just get going with them again.
Posted by Dawn at 10:37